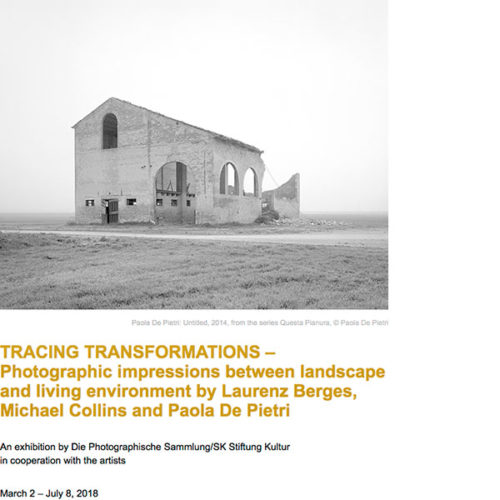 The “Tracing Transformations” project presents three positions from three different countries: Laurenz Berges (*1966) from Düsseldorf, Michael Collins (*1961) from London, and Paola De Pietri (*1960) from Reggio Emilia, Italy. Their photographs focus on landscape-related and structural phenomena that they primarily discovered in the vicinity of their studios or their homes and in this respect can be studied over the long term. All three of them attentively observe the meticulous transformation of their environment and use their large-format cameras and therefore the high image quality they achieve to document factual and atmospheric conditions.

The concept of “Tracing Transformations” finds multilayered analogies in the photographs by the three artists. It can refer to weathering, but it can also illustrate a form of intuition and decomposition, dissolution and change. On display are documentary but above all contemplative photographs that deny any premature answers, take the métier to its limits, and challenge our visual curiosity.

The spectrum of motifs in the photographs by Laurenz Berges makes reference to constellations of urban landscapes, to buildings, constructions, and spaces that, used and used up over decades and often abandoned, tell stories about everyday occurrences. His preferred terrain is the Ruhr region, where he finds, for example, simply built townhouses from the postwar period; discovers the avant-corps of a building from the turn of the 20th century that displays a bizarre, apparently useless wooden frame; three bells arranged on a wall that features countless signs of use and whose nameplates are blurred; a plane tree that was planted a long time ago and whose roots have grown under the pavement, raising several stone slabs. Yet no one seems to walk here anymore; the streets that Berges takes pictures of come across as deserted and show no signs of any future modernization.

Time seems to stand still in Laurenz Berges’s photographs, inviting the viewer to extend the duration of his or her gaze. In view of his pictures one can imagine how the artist feels his way, experiences and thinks his way into the atmosphere of the place, the objects he encounters there, the materials, and perhaps what once transpired there.

Michael Collins is presenting a selection of photographs from three different areas of his work. The diptych “Hoo Flats” features landscape views in the estuaries of the Thames and the Medway east of London and constitutes the culmination of the three years he spent working in this area. The artist found an imposing tree in Hampstead Heath in London and photographed it from three different perspectives. For Collins, the tree motif makes reference to the early period of photography and was studied in detail by Henry Fox Talbot, Eugène Cuvelier, or Gustave Le Gray. The photographer approaches the representational area of the sculptural with the three photographs taken in industrial areas. These images are also historical evidence of spent labor and situative atmospheres. In his oeuvre, Collins reflects on the metaphysical qualities of the medium of photography; he sees photography as equivalent to other artistic media, such as painting.

Michael Collins describes the works on show as follows: “These eight diverse works juxtapose subjects in order to draw out similarities and incongruities. Each has particular priorities. They are not documentary photographs and in consequence have a myriad of possible meanings. […] Conceived and composed as tableaux, they are both reflexive of the properties of photography and born of the elusive alchemy of this medium. […] Photography can not only depict air and atmosphere, but spatial dimension too. This quality of “sculptural illusion” is the key characteristic of these pictures; by expanding the depth of field, while maintaining a distinct emphasis on foreground focus and definition, the flat is made plastic, creating an apparent three dimensionality.“

The buildings and trees Paola De Pietri photographed between 2014 and 2017 are situated in the northern Italian Po Basin in the Emilia Romagna, Lombardy, and Veneto regions. The buildings are on former farms that were actively worked so long ago that they have in part fallen into ruin. The imposing freestanding trees were once planted to mark tracts of land or served to retain or protect grapevines. They have meanwhile mostly been relieved of their purpose. However, with the knowledge of the role they once played, each tree and each building can be read as a relic from a bygone epoch and becomes testimony to economic, social, and cultural traditions of the past.

Paola De Pietri’s delicately elaborated black-and-white photographs are characterized by a discretely stringent aesthetic. The motifs are the solitary trees and houses so typical of the region. The spacious character of the fertile basin with its fields and rows is exemplified by a relatively low horizon. The misty weather, the leafless trees document a colder and less colorful season, which De Pietri took advantage of for her work to achieve a visual emphasis of the seemingly exemplary motifs. The outlines of the more distant objects dissolve and merge in a light, foggy background. The photographs belong to the Questa Pianura series, which the artist began in 2004.

These works by Laurenz Berges, Michael Collins and Paola De Pietri encounter one another for the first time in this exhibition. It unites their intuition and their sharp eye for temporary as well as timeless realities, for facts and gradual transformations, as well as their sensitivity for the specifically fine aesthetic that arises from it.

A leporello (German/English) will be published to accompany each of the artistic positions. Assembled in a slipcase, as artistic publications the leporellos have been designed to acquire collector’s value. (Snoeck Verlag, Cologne; graphic design: Claudia Ott, Düsseldorf) 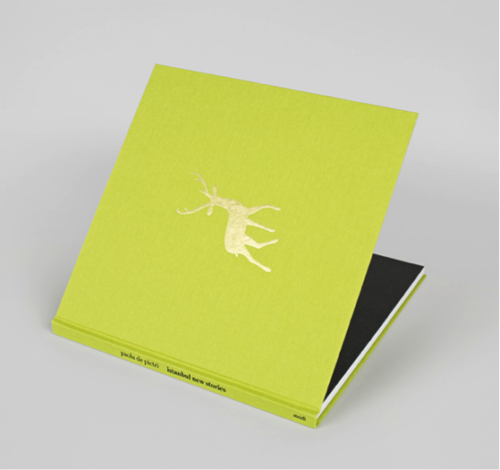 Over the last fifteen years, Istanbul has emerged as one of the principal megacities at the outset of the twenty-first century. The picturesque has given way to an unexpected boom of new, profit-driven urban development including high-rise, sterile gated communities and satellite cities to house a vastly expanding population — all at the expense of long-time residents and under the mantle of a self-confident and arbitrary government.

Shot in 2012 and 2013, Paola De Pietri’s serene and understated photographs of individuals against the backdrops of dusty construction sites and newly finished buildings focus on the impact of the changing urban landscape of Istanbul on the minds of its people. The newly created housing situations in anonymous apartment towers and detached homes interrupt human relations, shifting people’s social refuge from family and neighbors to imposed individualization and private solitude. The postures and body language reflect the precarious, unstable state of mind of a new and very mixed social stratum of domestic migrants coming to terms with unfamiliar models of life and environments, in which stray dogs linger like ghosts from the past.